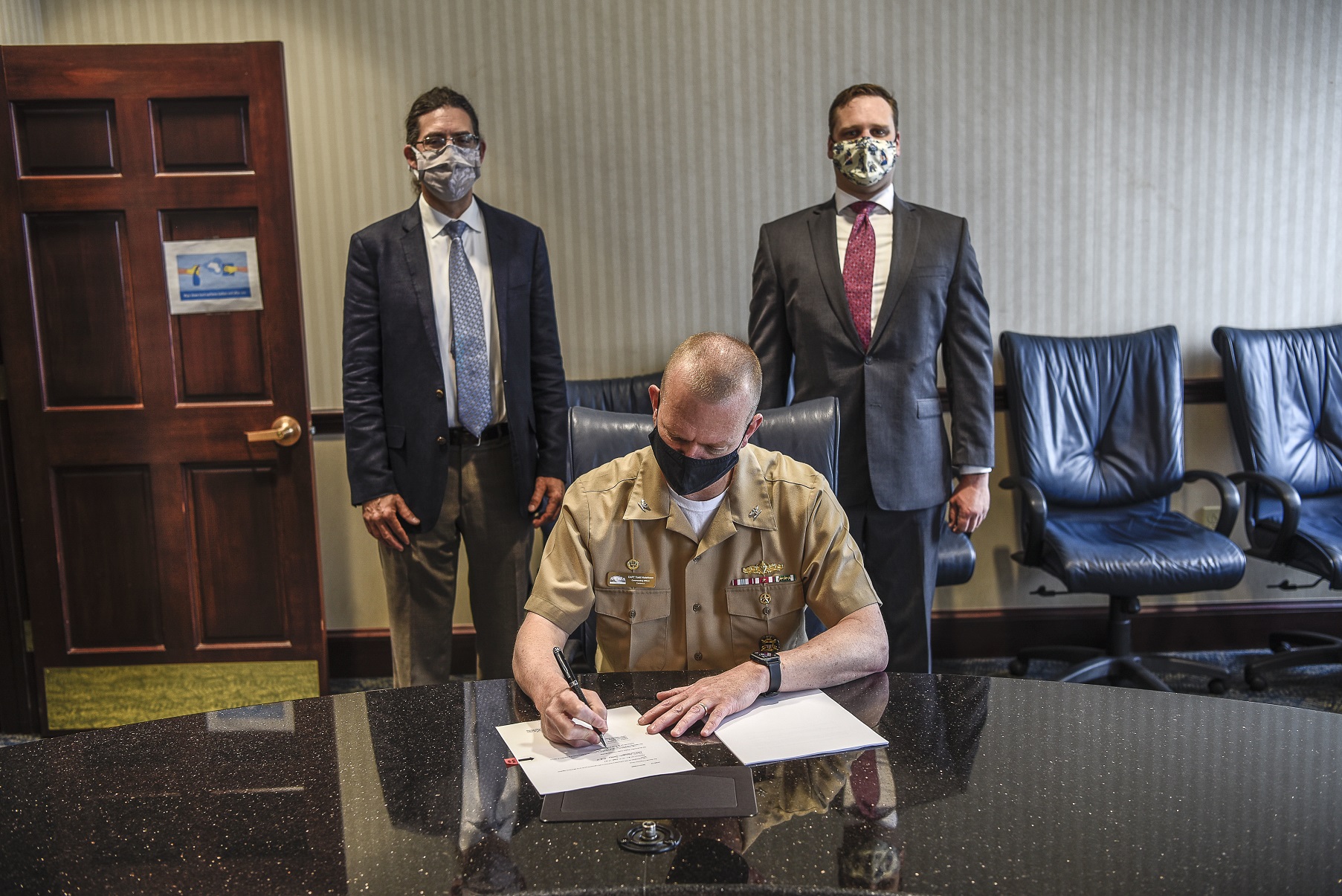 By using a sophisticated heating and cooling system, the MASSMELT machine is able to process compressible solid waste into a dense, extruded log. It exploits the plastic and waxes present in a typical waste stream to encapsulate the remainder of the waste material as well as eliminating fluids to reduce its weight. This reduces total waste volume at an improved processing rate, compared to existing solid waste management systems.

“In 2009, our original team lead had come across TCG and their MASSMELT product, but it didn’t seem worthwhile back then,” Peter Cheung said, Engineer, Environmental Engineering, Science and Technology Branch (Code 633) and Carderock’s Principal Investigator in this CRADA. “But, now their technology has improved. We are always looking for ways to improve existing processes, so when this idea was brought up again about a year and a half ago, we decided to visit TCG again to conduct demonstration tests. Based on those tests, we determined it could be a fit for future Navy solid waste management requirements, so Naval Sea Systems Command approved the purchase of the MASSMELT for additional research, development and testing at Carderock.

The objective of the CRADA is for Carderock to build a next-generation (NextGen) PWP prototype where the engineering drawings and process software are Navy-owned and content-controlled, and to advance the state-of-the-art of the MASSMELT technology for potential commercial applications.

“We are currently in the process of testing the current state of the MASSMELT system,” Cheung said. “From this evaluation and testing, we hope to come up with a better system, one that is optimized to meet all the Navy requirements. In order to do that, we need to make modifications and changes. We are hoping to have our finished product within two years.”

With the signing of this CRADA, Carderock and TCG have agreed to collaborate on a handful of different tasks, as well as perform tasks individually.

In collaboration, Carderock and TCG will co-develop initial test plans, share knowledge about the MASSMELT and NextGen PWP, analyze test results and identify engineering solutions to issues and improve risk mitigation, identify improvements to system productivity, operability, maintainability and reliability of the design, as well as produce a final product that will meet the Navy’s fleet needs. This final product can potentially be shared with the North Atlantic Treaty Organization (NATO) and other ally foreign navies.

“TCG is a growing company, so this CRADA is a great win for them, as well as for us,” Cheung said. “We get to use their product to create our own Navy product, and they get the opportunity to say they worked on this process with the U.S. Navy, as well as having the right to manufacture and sell this improved version to the Navy and other customers.”

Individually, Carderock has agreed to perform several tasks under this CRADA. Among these tasks are a laboratory evaluation using the TCG prototype, MASSMELT, as well as modifying the MASSMELT to meet U.S. Navy requirements, and sharing with TCG all subject data produced in assessing the TCG prototype and in developing a Navy shipboard version of the MASSMELT-based NextGen PWP.

As for TCG, they have agreed to perform six tasks. Among these are providing Carderock with all available MASSMELT technical manual(s), installations drawings, training materials and software, permit Carderock to modify MASSMELT, as required, to meet U.S. Navy requirements and to provide Carderock with technical support and knowhow regarding the TCG prototype MASSMELT.

“With the CRADA in place, we can come up with an improved design that both Navy and TCG will own, while allowing TCG to keep their original design, and give them manufacturing and selling rights to the Navy and other potential customers. It’s a win-win,” Cheung said.