Cardiff-based Thermal Compaction Group eyes significant growth following the sale of its 'Massmelt' prototype.
Thermal compaction technology developed in Wales is set to help the U.S. Navy reduce the waste produced by its fleet by up to 75%.

Cardiff-based Thermal Compaction Group (TCG) has sold a prototype of its patented Massmelt thermal compaction system to the U.S. Navy, in a six-figure deal. The firm is now in negotiations to licence the design for manufacture in the U.S., in a potentially multi-million-dollar deal.
TCG, based in Curran Road, was founded in 2014 and specialises in sustainable waste recycling systems that provide cost-effective solutions to common waste management problems.
The firm has been assisted by the Business Wales Accelerated Growth Programme (AGP) which provides targeted support for ambitious growing firms. The programme is part-funded by the European Regional Development Fund through the Welsh Government.
The team consists of researchers and engineers with a shared commitment to building a greener future through innovative, patent-protected technology. The company has developed a range of products that contribute to the circular economy by reducing waste volume and allowing it to be re-used or recycled. TCG's products are particularly focused on processing single-use plastics, thus reducing the amount ending up in landfill or at sea.
The firm's Massmelt system uses compaction and heat to reduce the volume of compactable waste by around 75%, and moisture content by up to 25%. The system uses plastics within the waste to form a thermally binding crust or skin on the outside, allowing the output to maintain a cylindrical shape at the end of the thermal compaction process. These output 'logs' can be cut to any length and re-used in a variety of applications, including fence posts or flood defences. As well as preventing waste from ending up in landfill, Massmelt contributes to a reduced carbon footprint by minimising the transportation required to dispose of waste. 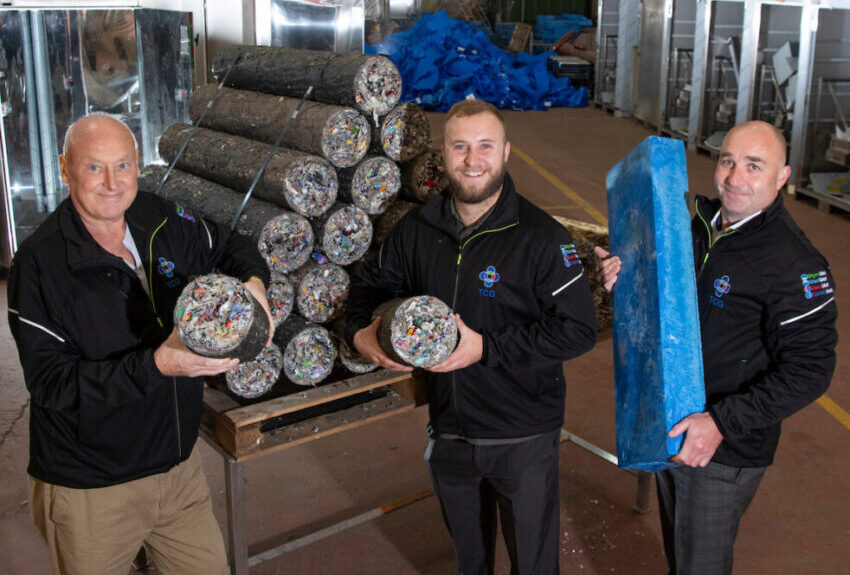 L-R: Philip Davison-Sebry, Thomas Davison-Sebry and Mathew Rapson of Cardiff-based Thermal Compaction Group (TCG) with the firm’s patented Massmelt thermal compaction system, which is being trialled by the US Navy.
Commenting on the U.S. Navy deal, Managing Director of TCG, Philip Davison-Sebry, said:
"The U.S. Navy operates thousands of aircraft, over 280 battle force ships and submarines, 140 auxiliary ships, and approximately 200 installations to support those assets worldwide. It recognises its responsibility to serve as a good steward of the environment as part of its mission, and we are delighted to be working with the U.S. Navy to help reduce the volume of waste it produces across its vast fleet.
"At the moment, the prototype is being trialled at a Navy Research Laboratory in Maryland, with a view to manufacture the system in the U.S. under licence should all go well. At this stage, all the indications are positive, and we are in ongoing discussions about next steps.
"Our business was born out of a passion for using intelligent engineering to solve one of the biggest issues facing the planet today – how to reduce the impact of waste, and re-use it where possible. It's a source of great pride to our small team that our technology is being used to help such a major military force reduce its environmental impact." 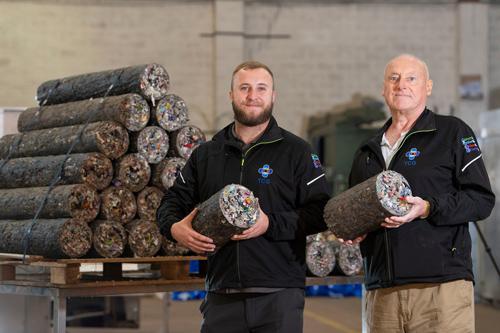 L-R: Thomas Davison-Sebry and Philip Davison-Sebry of Cardiff-based Thermal Compaction Group (TCG) with the firm’s patented Massmelt thermal compaction system, which is being trialled by the US Navy.
TCG now aims to increase its workforce by 200% over the next two years to meet the increasing demand for its technology.
Since signing up to the Business Wales Accelerated Growth Programme (AGP) programme in 2019, the company has received mentoring and specialist advice on market analysis, funding opportunities and establishing key client contacts. This support has proved "very helpful" according to Mr Davison-Sebry:
"As a small company, it's been invaluable to have the support of our relationship manager Howard Jones and several experienced business coaches as we have navigated our way from the R & D phase to a period of high growth.
“We are very grateful for the service we have received from the Business Wales Accelerated Growth Programme and would recommend it to any business looking to scale up and grow."
Richard Morris of the Excelerator Consortium, which delivers the Business Wales Accelerated Growth Programme, said:
“It's fantastic to see TCG's innovative waste reduction technology being trialled by the U.S. Navy. There are clearly many benefits with this solution and we wish them well with this venture. TCG is an excellent example of an innovative Welsh business leading the way in the effort to reduce the impact of waste across the globe."